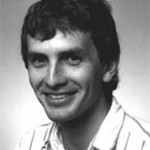 Kenneth A. Farley was awarded the 1999 James B. Macelwane Medal at the AGU Fall Meeting Honors Ceremony, which was held on December 15, 1999, in San Francisco, California. The Macelwane Medal recognizes significant contributions to the geophysical sciences by a young scientist of outstanding ability.

“As a chemistry major at Yale, Ken Farley decided to pursue a life in geochemistry. He demonstrated his resolve by doing a senior thesis with me on the distribution of 210Pb in ocean water profiles collected around Antarctica. In his senior year he also went on two expeditions from Scripps with the person who was to be his mentor in graduate school, Harmon Craig. He thereby showed that his interest in geochemistry was indeed serious.

“His impressive thesis work at Scripps was a signal of things to come. He successfully harnessed the powerful tool of rare gas mass spectrometric isotope ratio analysis to the problems of sources of mantle-derived rocks. He showed that putatively primitive materials from the mantle had imprinted in their rare gas complexions both the mantle signature and a surface-derived recycled component. This work has been continued and extended, in collaboration with others, to include all the radiogenic isotopes. The role in defining how the mantle and crust interact as seen in ocean island basalts has been sharpened and set on sensible footing, thanks to his involvement.

“Ken’s attention has recently focused on other fundamental problems of the Earth. His work on the imprint of interplanetary dust on accumulating deep-sea sediments—based on excess 3He measurements—has enlivened the discussion of the variability in cosmic dust flux over time, climate, and sedimentary processes in the deep ocean. He has shown that a stratigraphic history of cosmic dust can be inferred from the 3He indicator. He has also extended his work to understanding the production and retention of 4He in minerals from crustal rocks to infer the history of mountain uplift. Researchers had steered clear of helium in this context, but Ken’s detailed and distinctive approach has changed all that.

“The common property of each of these uses of isotope geochemistry is that Ken does not follow the usual, safe path but, rather, explores relationships required by his thoughtful, heroic nature. His long and diverse bibliography clearly shows the development of ideas since his days as a graduate student, and the papers are all of substance. His research will always be fun to watch. It will never be ho-hum.”

“I feel very honored to have been chosen for this award, and I thank Karl Turekian for his kind citation. More than anything else, my receipt of the Macelwane Medal reflects the extraordinary community I have interacted with over the years, and I want to acknowledge those who have made my work possible.

“Like many before me, I was captured into geochemistry by Karl Turekian. Although I was a chemistry major at Yale, a set of random occurrences led me to undertake an undergraduate research project with Karl. After establishing that I was not a refugee from the ‘hard sciences,’ he took me in and sold me on geochemistry. I feel lucky to have been so unexpectedly directed into this field, and I have over the years benefitted greatly from Karl’s wisdom, personal concern, and advice.

“On Karl’s suggestion (a.k.a. order) I chose to work with Harmon Craig at Scripps for my Ph.D. From Harmon and others I learned isotope geochemistry—in particular, the noble gas business that I have adopted as my own. Harmon’s lab was always an exciting (if not easy) place to work, with an impressive diversity of ongoing projects. This diversity made an important impression on me: if all you have is a hammer, then you’d better figure out how to apply nails to every problem.

“When I was offered a professorship at Caltech in 1993, there were many who doubted the wisdom of moving into such a snakepit (“You’re not actually considering accepting are you?”). But after my years with Karl and Harmon, I decided I had already been tested under fire. Fortunately, I have discovered that this reputation is totally inaccurate, and I credit much of my intellectual growth and success to the unique environment at Caltech. It is a pleasure to work at an institution and with colleagues so committed to getting science done. I especially thank Ed Stolper for years of friendship and advice; he provides an extraordinary role model for scientific excellence, integrity, and leadership. George Rossman, Lee Silver, Brian Wernicke, and Don Burnett have spent countless hours explaining to me basic principles beyond my field of expertise, and these invaluable conversations have allowed me to expand my research horizons tremendously.

“The late Gene Shoemaker pointed out the significance of some of my early work on cosmic dust, and his suggestions and guidance led me to a very fruitful area of research. I am sorry that I cannot share my observations with him.

“I owe a debt to past and present members of my research group for their intellectual contributions, discussions, comradeship, and help in the lab.

“A generous Fellowship for Science and Engineering from the David and Lucille Packard Foundation provided me the flexibility to pursue my own research agenda without worrying about the ‘riskiness’ that tends to kill proposals and therefore innovation. It would be wonderful if all junior researchers were allowed such an opportunity to pursue their own ideas.

“Most importantly, I must recognize my family. As a child, my parents never tired of stoking the fires of my curiosity, and I hope I can do as well with my children. My wife Kristen and my two sons, Scott and Ryan, have been an unending source of encouragement, support, and love despite long hours, bad days, numerous out-of-town meetings, and late-night trips to the lab to clean up disasters. I could not have succeeded without them.”